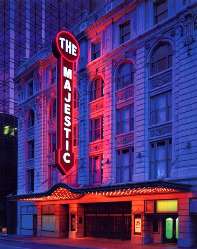 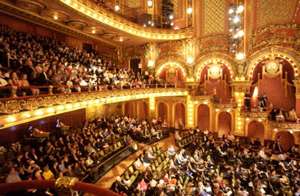 PIANIST SGOUROS IS AN OLD MASTER AT 19

After a season's absence, Dimitris Sgouros returned to Dallas, this time in recital for Civic Music at the Majestic Theatre. Now an old man of 19, he gave a program that would put the fear of God in the heart of any pianist of any age.

All of this was the act of a fecund mind, one uninterested in the status quo. Along with the adventurousness of the program, Sgouros seemed to be experimenting with new weights and colors that took him farther beyond the pianistic norm. Some worked, some did not. But nothing he did was unthoughtful or merely provocative.

Busoni's Fourth Ballet-Scene is a collection of waltzes written at the end of the last century and reworked two decades later. Despite their Viennese flavorings, they have a surprising impressionistic cast -- the same intoxicating mixture found in Ravel's La Valse. Sgouros played them with a fluidity that suavely masked their intricate difficulties and left as residue only a sense of deft elegance.

We have become accustomed to the Andante spianato and Grand Polonaise in a solo version of an arrangement made of the piece for piano and orchestra. But Sgouros reminded us that it is a quite different, more intimate work as originally conceived by Chopin. It was the interior spirit of the work he was after rather than its surface glitter, and his was the sort of creative performance that made one rethink this music.

If up to this point Sgouros seemed to have been holding the might of his fingers in check, he unfurled them in all their demonic power and fleet articulation with the Liszt Don Juan paraphrase. I still don't believe what I heard. This must rank as Liszt's most extravagant and demanding solo keyboard work.

Most pianists avoid it entirely; many make cuts; still others play it at what for Sgouros would be a practice tempo. But he has gone beyond conquering the notes; he revels in them and pushes himself to what must be the outer extremes of his considerable facility and pianistic panache.

It is impossible to perform this near-symphonic piece without handfuls of wrong notes. Sgouros missed his share, yet his accuracy was far above par. What mattered more was the brilliant way he clarified Liszt's structuring of three of the opera's highlights -- the overture, the duet "La ci darem la mano' and the Champagne aria -- and illuminated the tangled lines of this sprawling piece of bravura.

The Schumann came almost as an anticlimax, though it, too, was ripe in expression and searching in pianism. If anyone thought by the end of the Schumann that Sgouros was spent, they must have gone into shock at his second encore. He pulled out of his hat one more dazzling, grueling and little-heard transcription -- The Blue Danube Waltz as reset for solo piano by Adolf Schulz-Evler.

It is little known because few pianists are willing to risk its dangers in public or challenge the memory of the legendary recording made of it by Josef Lhevinne. In recent times I can only recall Jorge Bolet and Earl Wild placing themselves on the line with this glorious escapade in three-quarter time.

It held no fears for Sgouros. The way he dispatched its terrors without a loss of veneer or stylishness tells better than words can of why this Greek wonder continues to command so bright a place in the sun among contemporary pianists.